Here is the story of what happened to my friend and I before we arrived at BBC TV Centre for the infamous recording of Bottom…GAS.

I had a real job to sleep last night, I was too excited for today. I kept waking at all hours, because today was the day I was finally going to get to see my comedy heroes, Rik and Ade, live in the flesh! In the end I decided to get up early and got myself ready, even though it was ages before I had to leave. Today turned out to be an extremely hot day, so I was really glad I decided to wear my shorts.  Met my friend at the train station and we caught the 12pm train to London. We thought we’d sit in the buffet area as everywhere else seemed to be full, however what we didn’t realise was that it was a smoking area. Luckily I had my battery operated hand fan with me, so we were attempting to blow all the smoke away with that! It was still really stuffy sitting there though for well over an hour.

Arrived at Waterloo Station and headed for Leicester Square on the tube. We found a nice shady spot to sit, amongst the many people who were there lounging and enjoying the sunshine. We were good and had brought a packed lunch with us, so once that was eaten we joyfully headed for the HMV Mega Store in Oxford Street. This place is huge, and we did get a bit lost! Whilst my friend was busy trying to decide weather to buy the  EMF 12″ import of Unbelievable (which she did in the end). I noticed a poster pinned up, it said that Trev and Simon were going to be in the store signing copies of their latest video – this just so  happened to be today at 4pm. Great! we thought, we’ll have come back for that. It was now 2.50pm, so we had just over an hour to kill. We both really liked Trev and Simon and would often watch Going Live! on Saturday mornings, just for their sketches.

4pm soon came round, so back to HMV we went and headed up the escalators to the video department. Here, there were quite a few people arriving and waiting to meet them. Some HMV Staff then starting to get things ready, putting up some barriers directly in front of us. Next we heard the HMV DJ introduce and do an interview with Trev and Simon, which we listened to before they finally walked out, and then sit at a table that was in front of us behind the barriers. They sadly weren’t signing anything other than copies of their new video, I did however take some photos of them. Simon happily chatted to us for a bit and threw some grapes at us too. We were made up with this and extremely trilled to see them, it had put us in a really good mood, they seemed really nice too…it was now time for us to head off to the BBC…we had important queuing to do, if we wanted to get good seats to see Rik and Ade at work for the recording of Bottom!!…

Trev and Simon both studied Drama at Manchester University and were not many years below Rik and Ade. They have a fantastic story on their blog about that time in their lives, and about what happened when they had the opportunity to meet the then newly famous Rik Mayall, when they were young drama students.

I’ve also heard them tell the same story to Richard Herring on his RHLSTP (Richard Herring’s Leicester Square Theatre Podcast). Check it out you will not be disappointed.

Today was the very last episode of Going Live! I was amazed to see Rik and Ade make an appearance on it – yes the Saturday morning kids show, promoting their Bottom Live tour! Can you believe it? Trev and Simon talk about this next clip to Richard Herring. Here they are attempting to interview Rik and Ade…

Later on in the show Rik and Ade also attempt a live phone in. I remember watching this live very clearly, it’s pure car crash TV…Don’t you just love the awkwardness of live Telly! 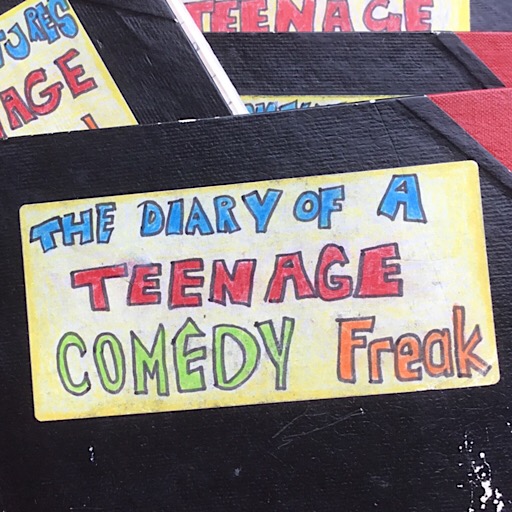