It’s always fascinating to hear how people discover and become a fan of Rik Mayall. Many fans it would seem discover his work at a very young and tender age. Especially when you have older brothers and a Dad who likes to watch his comedy.  Darren is one such fan.

Thank you to: Darren Sheppard

Unfortunately, I was only born in 1991, so I would have been too young for the shows. However, my love for Bottom/Rik Mayall came at an early age in the 90s, probably around 1997 when I came across a Bottom VHS tape, I think it was titled Bottom 2, Parade and a yellow The Young Ones VHS. I would watch these endlessly as a child. My dad would take me to the local shops, and we would fill a bowl up of chocolate minstrels and wine gums, sometimes chippy food would also be bought for the night in ahead if money allowed. I would watch Bottom with my 2 other older brothers and my Dad, I felt like such a naughty boy being allowed to watch a certificate 15 video at the age of around 6/7. I do recall watching some episodes on TV, but I think they may have been reruns at the time.

My love for Bottom continued during my childhood by the way of video rentals. During the late 90’s we would have this, and probably unlicensed illegally operated, yellow video rental van that would drive around on a Friday afternoon ready for people to rent videos for the weekend. The outside of the van bared no signage but inside it was kitted out with a 360-degree wall of videos on shelves. In the smorgasbord of videos there were only 2 titles that I would look out for, Mr Bean adventures and of course, Bottom/The Young ones! I remember I would rotate between a different coloured Mr Bean video and anything Bottom or The Young Ones actually.

One other memory of Bottom I have from a child was in 2001 when my Dad and my older brother, mentioned that they were off to see Rik and Ade live during their An Arse Oddity stage show. I was still too young at the time to go to the show. But I do remember how I felt annoyed and upset that I was made to stay at home and sit with my mother whilst she looked after me and my other slightly less older brother. My Dad and older brother came back in high-spirts after the show quoting what they’d just seen, this only made me more jealous!

So, that’s my early recollection and introduction to how I found Bottom. From there on onwards to now I still watch it and like many others, must have seen each episode around 1,000,000,000 times.

Darren is also keen collector of all things Bottom and has recently acquired these brilliant signed posters from the first two Bottom Live tours. Buying them both second hand the sellers told Darren the provenance behind them. If you have any unwanted Bottom memorabilia you’d like to sell and see go to a good home then please get in touch with me here or you can direct message Darren on Instagram @darrensheppFirst one is signed to Desperate Dan, who was a member of the maintenance team at the Edinburgh Playhouse for a number of years. 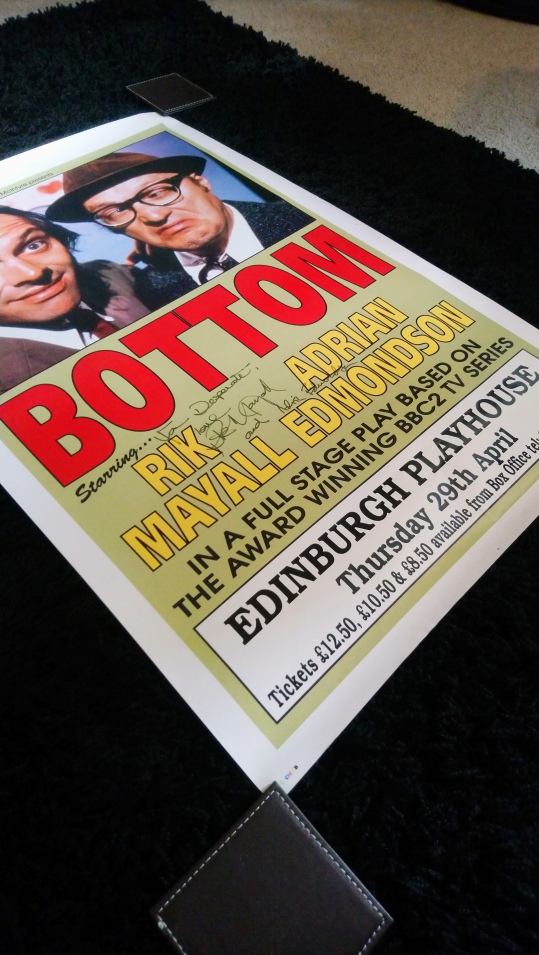 The seller of the second poster sent Darren this lovely message.”Hi Darren, I’m so glad it’s going to another fan of the duo. I would have hated for the poster to go to a seller. I hope you display the poster with pride mate! My friend worked with Clyde 1 radio in Glasgow and I started a conversation with a “randomer” in the reception (waiting for my friend hosting the show) that person turned out to be Rik’s manager and I mentioned I was hoping to get a photo with Rik, they then introduced me to Mayall; that’s when the partnership between myself and his manager began. I even got my son to meet him and he was fantastic even with the younger generation. Hope the poster is taking pride of place in your house mate!” 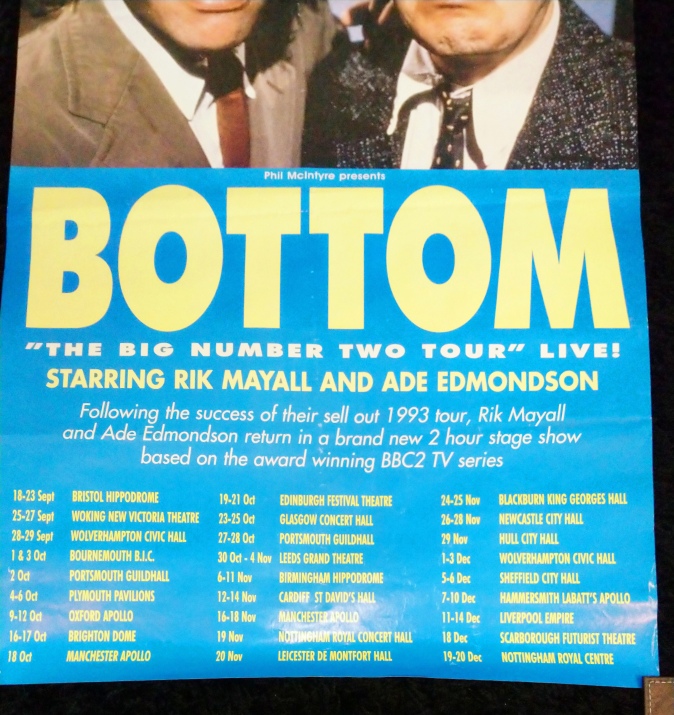 Thank you Darren for getting in touch and sharing your memories and great posters for more fans around the world to see and enjoy. I do hope they are taking pride of place in your home.

Then why not donate to help support it and the running costs. In return you will receive an exclusive Rik Mayall Scrapbook badge. £5 Donation - choose 1 badge. £10 Donation - choose 3 badges. £20 Donation - choose 6 badges. £30 Donation - get the full set. There are 12 different designs to choose from, so make sure you message me with your choice. See support page for more details. Thank you x

What does Rik Mayall mean to you? Have you met him? Did you see him live? Did you work with him? How did you discover his shows?

And you can choose an exclusive Rik Mayall Scrapbook thank you badge. See support page for more details.

Then why not donate to help support it and the running costs. In return you will receive an exclusive Rik Mayall Scrapbook badge. £5 Donation - choose 1 badge. £10 Donation - choose 3 badges. £20 Donation - choose 6 badges. £30 Donation - get the full set. There are 12 different designs to choose from, so make sure you message me with your choice. See support page for more details. Thank you x

What did Father Christmas bring you? #rikmayall #rikmayallscrapbook #richieandeddie #crochet #candle #blueray #theyoungones
Merry Ruddy Christmas everyone #rikmayall #rikmayallscrapbook #merryruddychristmas
@adamgreenart has just unearthed some great photos he took of Rik. Thank you Adam for letting me share… #rikmayall
Celebrating The Young Ones 40th Anniversary and watching where it all began with Demolition. Going old school and putting on the VHS… #theyoungones #theyoungones40 #theyoungones40years #theyoungones40thanniversary #rikmayall #rikmayallscrapbook
A little bit of Rik on one’s wall, sure helps to brighten a rainy November day. #rikmayall
New blog post now live. Read about and see more pictures of @dayun_73 and my 40th anniversary celebration locations tour we did earlier this year. Link in bio. #rikmayall #rikmayallscrapbook #theyoungones #15credibilitystreet #bristol
Exciting news 40th Anniversary edition of The Young Ones on Blue-Ray remastered with exiting extras… featuring fundamental frolics and the complete two episodes of Boom Boom out go the lights plus lots lots more.
Thank you @an_drew_ward for sharing this wonderful image of Rik, which was taken by his dad @andrewward_photography This picture along with other incredible images has now been rightfully put into a wonderful book.
Sorry it’s been so long, I’m finally getting myself settled again. I’ve been without a Mac for such a long time, but I’ve finally got one set up again! So watch this space, I’ve soooooo much to update and add to the website…. it’s difficult to know where to start!! #rikmayall #rikmayallscrapbook
Pilgrimage to The House #theyoungones #rikmayall #theyoungoneshouse #scumbagcollege
I first visited the house in the 90’s, when photos were taken on film, I had no mobile phone, there was no internet and the way I found out where the house was located, was to pause the VHS player to see the name of the road😆. Today everything was achieved by the smart phone, train ticket, maps, photos, sharing it with fans of the show around the world and reading the news that our dear Queenie had passed away. “It’s just the passage of time Rik”.
Name the episodes….